Our project was developed since 2011 and officially founded in 2016, its main objectives being the publication and conservation of the tomb of Ramesses III in the Valley of the Kings (KV 11). Since 2017, it holds the concession of the Egyptian Ministry of Antiquities to study the tomb. The project is officially based at Humboldt-University Berlin and cooperates with the Universities of Luxor and Qena. The long-term project combines traditional philological and archaeological research with more recent methods such as photogrammetry and virtual reality. Along with continuous fieldwork, a major focus lies on archival research that allows us to reconstruct the decoration programme of the tomb. Moreover, the project follows an interdisciplinary approach, integrating geological, petrological and hydrological studies in order to develop a strategy to preserve and protect this important part of the Egyptian World heritage.

There is a hieroglyphic transcription in comparison to further textual witnesses of the New Kingdom by Erik Hornung (1975) for the Litany of Re that is in the first and second corridor; specifics of this version, however, are not considered. Neither the exact direction of the hieroglyphs and lengths of the gaps, nor the correct division of the columns, the canon of the colors as well as the misspellings or the distribution of the text and the figures have been worked out. In addition to an examination of these aspects, omissions and additions of the text are to be interpreted in regard to the other variants of the Litany of Re. On the basis of the results, the correctness of the structure of the text by Hornung is to verify.

Moreover, this project has the goal to turn out the relation of the Litany of Re to other texts in this tomb.

In 2017 we received the permission of the Fitzwilliam Museum Cambridge for a photogrammetry record of the sarcophagus lid of Ramesses III (Inv. No. E.1.1823). A team from Oxford Archaeology East (Gareth Rees, James Fairbairn) was able to record the lid and produce a 3D-model of it. This can be used as a basis for future reconstructions as well as for a virtual join with the sarcophagus itself, now housed in the Musée du Louvre in Paris (Inv. No. D1). Recently, we received permission for a photogrammetry record of this object. We would like to thank our colleagues Helen Strudwick, Vincent Rondot and Mark Etienne for their kind support.

Reconstruction of the sarcophagus ensemble

The famous sarcophagus that was removed from the tomb of Ramesses III in the Valley of the Kings (KV 11) in the beginning of the 19th century is nowadays housed in two different European Museums: while the lid is displayed in the Fitzwilliam Museum in Cambridge (Inv. No. E.1.1823), the coffer is to be seen in the Musée du Louvre in Paris (Inv. No. D1). This sub-project of The Ramesses III (KV 11) Publication and Conservation Project deals with the object’s biography, including its original function and ownership as well as the more recent research history and changing museum displays. We also aim to create a photogrammetric 3D model in order to virtually reunite the coffer with its lid.

Next to this sarcophagus which has been known since the 18th century, we have collected evidence that there must have been more than one sarcophagus in KV 11. Next to stone fragments of various rock materials discovered by Ted Brock in the 1980’s, another inscribed sarcophagus fragment was found in the tomb's burial chamber. Therefore, we now aim to reconstruct the multiple sarcophagi found in the royal tomb KV 11.

Since thousands of years, the Valley of the Kings, which is a dried out Wadi (river bed), suffers from flash floods. The sarcophagus chamber (hall J) of KV 11 has been flooded after heavy rain falls between 1890 and 1910. Nowadays, the chamber is heavily destroyed and filled with debris. the project plans to clear Hall J in order to make it accessible for researchers, conservators and for the public in near future.

The maximum water level which decreased gradually is still visible today by the straight separation line between remaining plaster and the destroyed lower part of the walls in the sarcophagus chamber.

The reconstruction of wall scenes in KV 11 will take place with modern methods and a comparison with drawings and pictures of former researchers. In this way, it was possible to reconstruct the well-known bakery scene in chamber Ba, using the drawings of Ippolito Rosellini (I Monumenti dell' Egitto e della Nubia, Teil II, Monumenti Civili, Pisa 1834, LXXXV.) as master copies. Very useful are the sketches of Robert Hay (British Library London, partly published in: F. Mauric-Barberio, ‘Reconstitution du décor de la tombe de Ramsès III (partie inférieure) d’après les manuscrits de Robert Hay’, BIFAO 104 (2004), 389-456.) for other parts of the tomb. Since he used a camera lucida, the distortion-free recordings can be matched with modern photographs within a photo editing programme, making it possible to reconstruct the original condition of the wall reliefs. 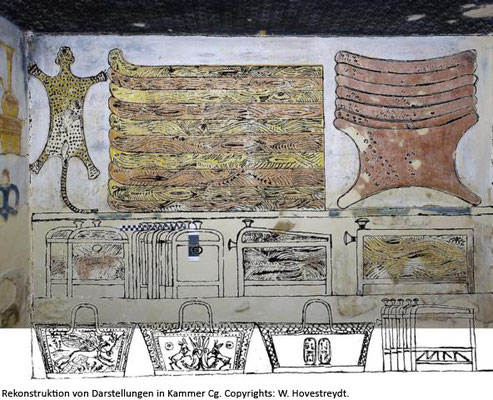 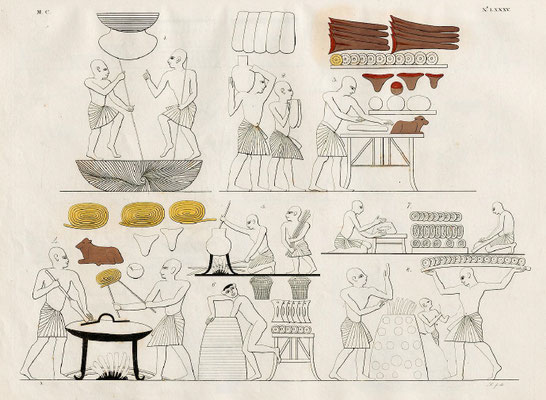 W. Hovestreydt, ‘Sideshow or not? On the Side-Rooms of the First Two Corridors in the Tomb of Ramesses III’, in B. J. J. Haring, O. E. Kaper, R. van Walsem (eds), The Workman's Progress. Studies in the Village of Deir el-Medina and other Documents from Western Thebes in Honour of Rob Demarée, (EU 28; Leiden, 2014), 103-132.

THE BOOK OF THE HEAVENLY COW

The depictions and texts of the so-called "Book of the Heavenly Cow" were shown in chamber Jc, which is situated close to the sarcophagus chamber. Nowadays, almost the whole decoration is lost. By aid of the RTI technique, we will be able to reconstruct the original reliefs.

2014 Recording of all scenes in the chambers Ba-Ch, chamber Fa, and hall J2011 Return to record the royal bakery scene in Chamber Ba