In this blog you will find all the news about our project and you will be informed about the current state of affairs.

Our winter field season was funded by the Antiquities Endowment Fund of the American Research Center in Egypt. We conducted a geo-archeological survey, a TST-survey and archaeological fieldwork as well as first conservational tests. We are currently processing our data in order to make it accessible to the public. We are grateful to our collaboration partners ARCE, Oxford Archaeology East and Joseph Brett McClain (Oriental Institute Chicago, The Epigraphic Survey) for their constant support.

In August 2019, the team members of the Ramesses III (KV 11) Publication and Conservation Project came together in Berlin for the project’s annual meeting. This year, the meeting was mainly concerned with the preparation of the winter campaign. Moreover, Anke Weber presented the results of the last field campaign in May 2018. The meeting concluded with the presentation “Digitizing the sarcophagus of Ramesses III – Zum Stand der Arbeiten am Grabensemble aus KV 11“ by Anke Weber and Lea Rees, reporting about the work carried out in the Fitzwilliam Museum in Cambridge and the Musée du Louvre in Paris together with our colleagues Gareth D. Rees, Helen Strudwick and Marc Etienne.

3D-model of the sarcophagus box of Ramesses III

In June, we had the opportunity to make a photogrammetric record of the sarcophagus box of Ramesses III in the Musée du Louvre in Paris and to create a 3D-model from it. After two years of preparation, we can now finally virtually reunite the coffer with its lid, which is housed in the Fitzwilliam Museum in Cambridge. The aim of this subproject is the recontextualisation of the sarcophagus and the scientific study of the funerary equipment from KV 11. We would like to express our thanks to Vincent Rondot, Hélène Guichard and, most of all, Marc Etienne for the permission and their kind support.

20.04.2018 Lecture of Dora Olsen: "Reconstructing the Opening of the Mouth in KV 11" (Ruprecht-Karls-Universität Heidelberg) 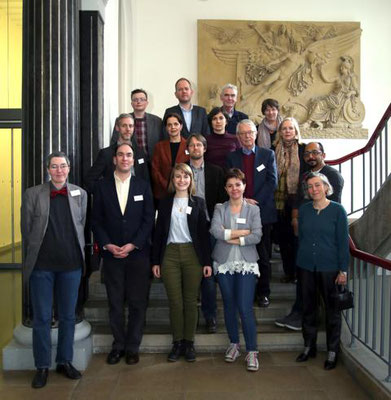 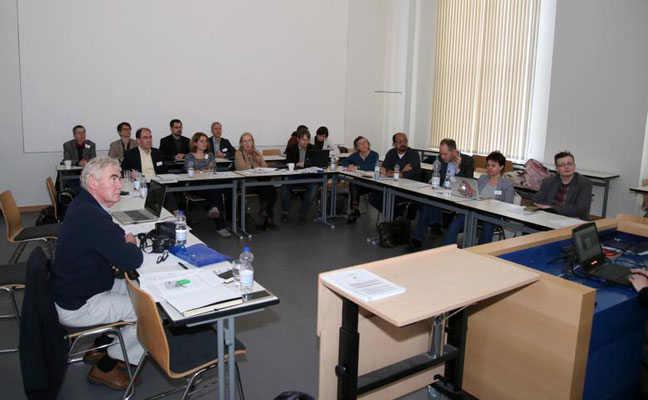 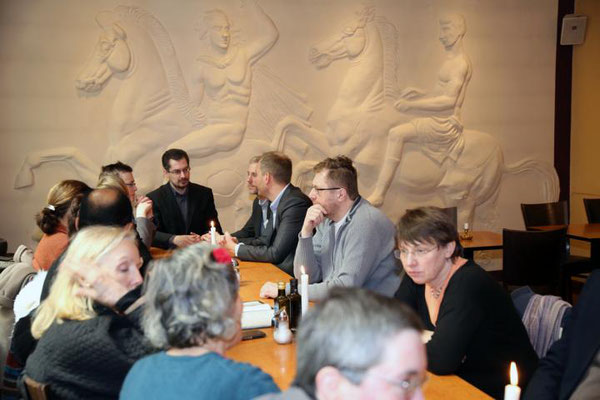 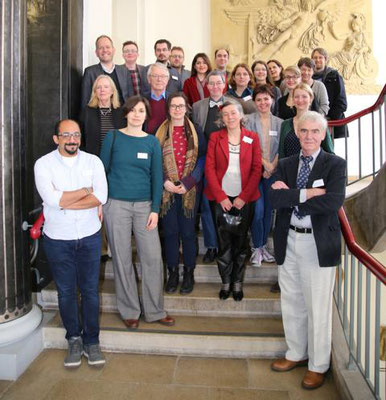 Workshop: From 23-24 February the third workshop of the Ramesses III (KV 11) Publication and Consevation Project took place. The individual contributions were divided over five panels:

- Introduction to the History and Current Research for KV 11

- Interpretation of Scenes and Scientific Approach

We thank the participants for their contributions and we are looking forward to working with the new team members.

Klara Dietze: The excavation of the burial chamber in KV 11. Planned methods and practical approach

Judith Bunbury: The Geology of the Valley of the Kings. How the builders countered faults and failings in KV 11

Helen Strudwick: The journey of the sarcophagus lid attributed to Ramesses III to the Fitzwilliam Museum in Cambridge

Lyla Pinch-Brock: The work of Ted Brock in the Tomb of Ramesses III. Objects and opinions

Florence Mauric-Barberio: Some light on the lost decoration in KV 17 and KV 11 using the notes and drawings made by Robert Hay

Daniel Werning: On the Book of Gates and the Books of the Earth in chambers F, Fa and J

Willem Hovestreydt: The decoration of the pillars in pillared hall F and the sarcophagus chamber. Correspondences and correlations

Dora Olsen: Reconstructing the Opening of the Mouth Ritual in KV 11

Winter field season: In this campaign we were able to complete a major part of the preliminary work on KV 11 and prepare it for publication. We thank our colleagues at Chicago House (in particular Ray Johnson, Brett McClain, and Jay Heidel) as well as the staff at Luxor University (in particular Mansour el-Nouby, Mahmoud el-Gabalawy, and Mohsen Toukhy) for their support. The tomb was re-opened to tourists in November 2017 after the Ministery of Antiquities had installed new glass screens, wooden walkways, and lighting. KV 11 is now accessible again to visitors from Corridor B to Corridor G. In 2018, the first publications from our project will appear with reports on the condition of the tomb as well as research results and the current status of activities.

Workshop: The second Ramesses III (KV 11) Publication and Conservation Project Workshop took place in Berlin in order to develop an agenda for future research in KV 11. The participants presented the progress of their research  and discussed aims and following working steps. Thus it was possible to  develop a consistent methodology for the scientific work in the tomb. Sandro Schwarz shed light on the depictions of ships in Chamber Bb, while Klara Dietze presented her methods to clear the sarcophagus chamber. Lea Röfer presented new results concerning the reconstruction of the sarcophagus lid, while Gareth D. Rees reported about the photogrammetrical documentation of the lid. A. Cantele told us about the reconstruction of the wall depictions in Chamber Jc, whereas A. Weber and W. Hovestreydt presented their results concerning the semantics of the tomb. J. Moje presented his methodology for a hieroglyphic palaeography of KV 11.

Spring field season: On the basis of our working hypothesis that rainwater accumulated in KV 11 for a long period of time (due to the special characteristics of the surrounding rock layers) we undertook a geoprospection in order to examine the Theban rock more precisely and to differentiate between individual layers. The so-called "Esna Shale" is located under the Theban limestone and was used for the construction of tombs, since it was easy to work with. The terrace temple of Queen Hatshepsut borders directly on the mountain massif, which, up to its highest terrace, is still part of the "Esna Shale". However, the rock has the disadvantage that it quickly absorbs water and then expands. As a result, the volume of the rock increases rapidly, up to the point at which the maximum of the absorption capacity is reached. Consequently, the water is prevented from draining and only gradually evaporates. According to our hypothesis, this was the case in the wake of the flood, which destroyed a large portion of the rear parts of KV 11.

For the first time, we were joined by our expert for the reconstruction of the Opening of the Mouth ritual - Dora Olsen, as well as our photographer Franz Nagy. Our team also welcomed Klara Dietze as a new member. She will be responsible for the archaeological clearing of the sarcophagus chamber in KV 11. Lea Röfer focuses on the reconstruction of the sarcophagus of Ramses III and the lid which is now housed in the Fitzwilliam Museum in Cambridge. 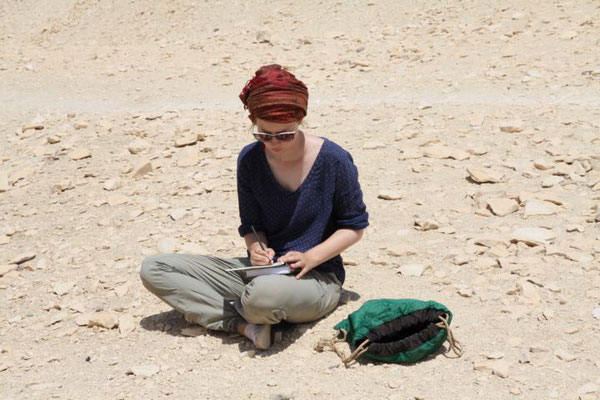 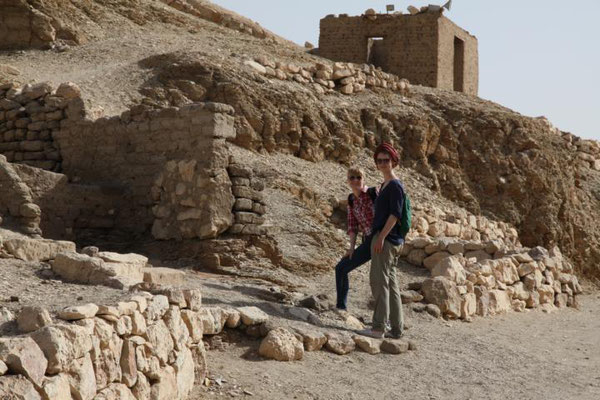 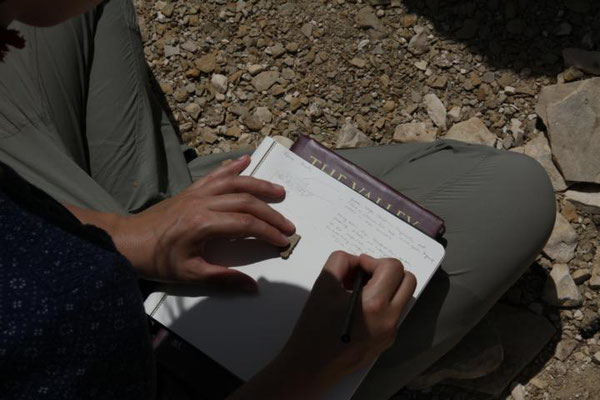 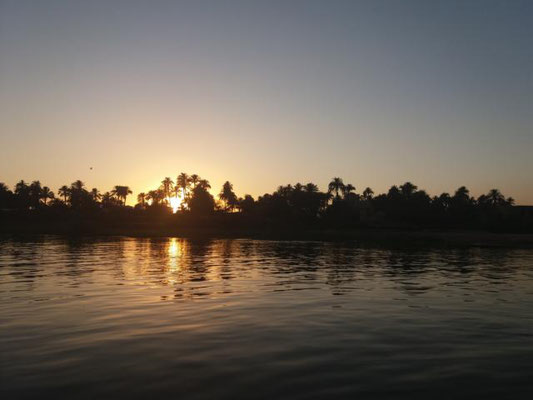 During the spring of 2017 our team received the concession for the conservation, study and work in KV 11. The first campaign took place immediately afterwards and focused on the preparations for the work in the tomb. Among other objectives a cooperation with the Faculty of Archeology in Luxor, founded recently by Dr. Mansour el-Nouby, was initiated (see photo; from left to right: Klara Dietze, Dora Olsen, Anke Weber and Mansour el-Nouby). The initiative aims to provide Egyptian students with fieldwork experience during our Field School. We are looking forward to working with the newly founded Faculty.

Workshop: At the beginning of the year, a first workshop on the reconstruction of the tomb of Ramses III (KV 11) took place in Berlin. For the first time, a large part of the team met to discuss its methodological approach. Jan Moje gave a lecture on the hieroglyphic palaeography of KV 11, while Lea Röfer reported about first results of the reconstruction of the sarcophagus lid attributed to Ramesses III. Dora Olsen presented first insights on the reconstruction of the Opening of the Mouth ritual in corridor G and also provided reference material. Daniel Werning presented the collation of the Books of the Netherworld in Hall J and Antonio Cantele showed his suggestions for reconstructing the representations and texts in chamber Jc. Willem Hovestreydt and Anke Weber discussed the decoration programme of KV11, with special emphasis on the ten small chambers in Corridors B and C. We would like to thank the Egyptological Research Association Berlin for the funding and preparation of this workshop.

During the autumn campaign 2016, Dr. Daniel Werning collated the Netherworld Books in the sarcophagus chamber of KV 11. Meanwhile, Antonio Cantele was respon-sible for the assessment of Chamber Jc. Of the so-called "Book of the Heavenly Cow", which was originally depicted here, only fragments are preserved. However, a reconstruction can be carried out with the help of publications by previous scholars and visitors to the tomb.

We started with recording the condition of the sarcopagus chamber (hall J) and measuring the rear part of KV 11. A project is planned to start in 2017, which focuses on the protection and refurbishment of this tomb to prevent it from further damage.